Using the docker package in Emacs has saved several minutes of my time (for each command) related to docker, and just as important - a tonne of effort involved in hunting for docker container names, command history, copying the container ID’s and so on that are very typical steps of messing around with docker. Anybody learning docker will know that these commands are used so frequently that it becomes rather annoying quickly.

As my Emacs configuration should indicate, I have installed the package docker.el with it the dockerfile and docker-compose minor mode packages. The main docker package enables me to list, view, launch and generally manage containers from within Emacs instead of using vebose Shell commands and possibly constructing aliases for common commands. Both the latter packages are more useful for developing and editing docker files (including within Org source blocks) with syntax highlighting. Currently, this has been setup with a minimal configuration, not different from the instructions on the package website.

I have M-x docker mapped to M-s d and this gives me instant access to all the images and containers on my system. It is invariably handy to run containers with specific commands as well and I intend to use it simplify my workflows. I believe such a capability of interacting with docker containers is for example a premium feature in Rstudio.

The best part of this bargain is running the docker package within Emacs on the terminal on a VPS. Therefore I have an overview of all the docker containers right within the terminal, with one press access to actions. This is how it looks:

There are a host of other possibilities, including controlling builds, using docker-compose and so on. The desired options can be set with single key-presses, similar to the magit porcelain.

The next step will be to find a way to interact with remote docker containers from my local Emacs setup. This would be super cool and convenient. Apparently the docker-tramp package can help with this. Maybe it’s my poor googline skills but - though here are some discussions around in Reddit on this topic - I was expecting many more blog posts or material on the web talking about workflows in using Docker and Emacs, especially considering the amount of effort being saved. 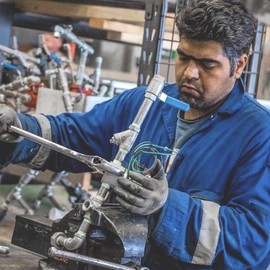